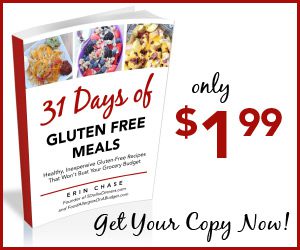 We’re not going to talk about my house today. Really. It’s BAD.

I spent the weekend in San Diego learning enough about blogging to make my head feel like it was going to explode. And now I’m pretty much zonked.

Hubby ran the dishwasher three times while I was gone (GO HUBBY!!) but somehow it looks like there was an explosion in there this morning.

I’m going to take a nap and worry about that later.

But I thought I’d share a quick, totally useful affiliate link. My friend Erin of $5 Dinners (who’s TOTALLY a big deal on the internet) has released 31 Days of Gluten Free Meals E-Cookbook based on a series she did a while back.

I know a LOT of people who have to keep gluten out of their diet and this can be a real challenge in the kitchen. AND it’s only 1.99!

Did you catch that? One Dollar and Ninety-Nine Cents!!

Go check it out. Or get 31 Days of Gluten Free Meals for Kindle