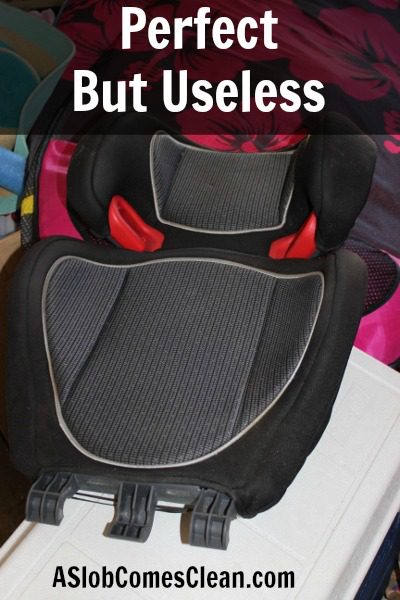 As I worked in the garage recently, sorting through clutter that had magically appeared . . . I found this.

It was perfect, but useless.

In case your kids aren’t in the booster seat stage, I’ll explain. This is the top portion of a booster seat for the car. When the kids first move out of a car seat, this back portion of the booster helps keep the seatbelt in the right place and also allows them to rest their heads when they fall asleep.

As they get bigger and are too tall for the back, you take it off and just use the bottom of the booster.

All my kids are big.

We haven’t used the back portion in several years. And even though we’ll soon be done with even the bottom section, carseats aren’t supposed to be used for more than five years or so. I’m pretty sure we have already passed the five year mark.

So why keep the top half for another year just to throw it away at the same time we throw away the bottom half?

I know. The answer is obvious. There’s no reason to keep it.

But it still felt weird to stick something perfect in the trash.