My husband and I use Seinfeld quotes in our daily conversations. We’re still grieving that Go On was cancelled after one awesome season.

But I do tend to get irritated when a huge and crazy situation happens simply because someone won’t admit the truth.

Doesn’t the truth set you free? If he/she/it would just be honest, everything would be fine!

Except that one time, I wasn’t honest.

I remembered it the other day when I glanced up from my Bible study time at my ultra-cluttered dining room table and saw this: 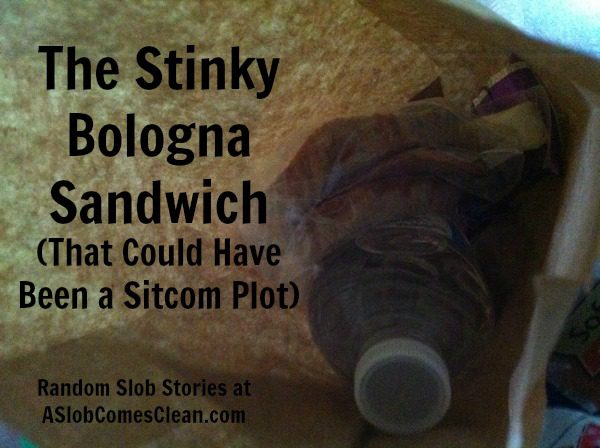 It was a week-old bologna sandwich. I knew it was a week old because my son had forgotten to take his lunch to school the week before.

Let’s not discuss the fact that it had been sitting unnoticed on a cluttered table for a week, or that my kids eat bologna. It had and they do.

Instead, I’ll tell you a story where I behaved in exactly the same manner as the sitcom characters that get on my nerves.

I had graduated from college in December, but didn’t move to Thailand until the following fall. In the spring after I graduated, I worked as a substitute teacher until I was hired as an aid in an early childhood special needs class.

I loved that job. I loved the four ladies I worked with and the kids. I just generally enjoyed every day there.

I especially loved when we would run out to lunch together. There was a morning class and an afternoon class, so we actually had a lunch break (unlike many teachers).

Anyway, someone suggested we go out to lunch and I thought that was a great idea. I never even thought about the uneaten bologna sandwich when I left school that day.

Then, on Monday morning, I walked into the room to find all four ladies frantically searching for a dead animal.

Something had crawled into the classroom over the weekend . . . and died.

I was equally concerned. I thought of the dear sweet children. Sweet children who might find this carcass if we did not find it first.

I searched as well. I remarked about the stench.

I followed my nose.

Snuck it out of the room and flushed the sandwich down the toilet.

Returned to the room to keep searching for the stench that was mysteriously beginning to diminish.

I couldn’t tell them.

Really. I wonder to this day why I felt I couldn’t let anyone know it was MY bologna sandwich instead of a decaying chicken.

I shook my head in wonder along with the other women when the smell was finally gone. I used my acting training to appear as mind-boggled as I could be.

And now, I wonder what was wrong with that particular bologna sandwich since this week-old version didn’t even have a scent.