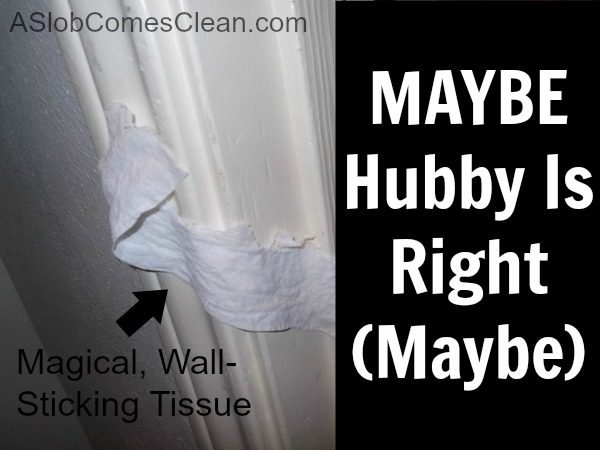 He was a ripe old 32 when I snagged him, so he had lived on his own for a while and is quite handy at dish-washing and clothes-laundering.

He checks pockets before washing jeans and . . . uses dryer sheets.

It’s not that I purposely DON’T do these things.  It’s just that they’re the kind of small details that never, ever occur to me.  I could (and do) say it’s because I’m so focused on getting the laundry done or that I’m just not that concerned about static.

But when it comes down to it, I despise washed Kleenex just as much as the next guy and I get irritated when my loose-fitting dress pants look like leggings as they cling to my thighs.

I do think he has a point.  See that tissue in the picture?  It, along with fifty-ba-jillion of its siblings, were stuck to a load of laundry where I’d obviously neglected to look for it before it went into the washing machine.

And it’s held to the wall by the lovely static that might have been prevented if I had used one of the dryer sheets that sits in my cabinet.

So I admit it.  Hubby’s right on this one.  Unfortunately, me admitting that doesn’t have much impact on whether or not I’ll remember to act on it next time.