The lovely Lenetta used to often remind me that clutter is made up of “unmade decisions.” 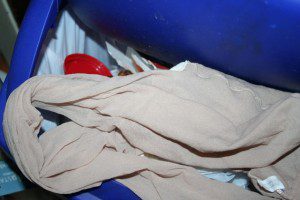 What things can I decide ahead of time will be pitched in the trash?

I just tossed those pantyhose in the picture above.  I rarely get runs in my pantyhose for the simple reason that . . . I rarely wear pantyhose.

After wearing those yesterday, there was a big hole in them.  And yet . . . a feeling of panic rippled through my chest as I threw them in the trash.

I know that I won’t think about my need for pantyhose until 5 minutes before the next time I need to walk out the door wearing them.  So, for some reason . . . that makes me want to keep them.

Keeping them would soothe my slob brain just enough that I wouldn’t worry about not having ANY pantyhose.

Until the moment when I put them on and realize they have a hole.  The moment when (re)discovering a run would be a most annoying thing.

Maybe . . . maybe . . . the nagging knowledge that I do not own any pantyhose at all will cause enough mental discomfort that I’ll think to get some before the next time I need them. Read Newer Post How I Store Plastic Food Containers
Read Older Post Baked Penne with Beef: Trying Out a New (To Me) Ingredient

Read Newer Post How I Store Plastic Food Containers
Read Older Post Baked Penne with Beef: Trying Out a New (To Me) Ingredient