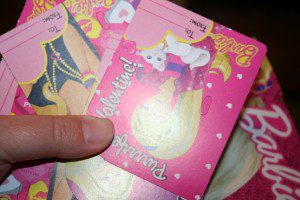 Those are Barbie Valentines.  The extra four or five that we didn’t need.

I’m overly proud of myself for throwing them in the trash on February 15th.

A few weeks ago, I had lunch at a restaurant with my best friend.  (Yes, I realize this SEEMS to be a totally unrelated story.) There was a mix-up with the check, and they had to re-do it and brought us another one.  Since we split it and she used a gift card for a portion of hers, there were about five different receipts that were now officially trash.

I watched in awe as she tore them into tiny pieces right then and there and placed them neatly on a plate for the busboy to throw away.

She didn’t unconsciously shove them in her purse.

Y’know, like I would have done.  To deal with them later.

MUCH later.  At a point when I would be sifting through sixty similar receipts . . . perhaps on my bed . . . while desperately wishing I could just get to sleep already . . . but unable to . . . because I  dumped out my purse there earlier in the day . . . while frantically looking for something.

I’m pretty sure her way is better.  Y’know, since she’s normal and all.

I’m trying to eliminate the half-way point for papers whenever possible.

I’ve been doing things like . . . not sticking the worksheets from our Sunday morning Bible Study class in my Bible, never to be looked at again.  (Until I’m cleaning out the Suburban and find the ones that fell out.)

I’ve been consciously throwing them in the trash as I leave the classroom. I know that the teacher worked hard to prepare them (since I happen to sleep with him every night), but I also know he’ll get over it.

As a still-recovering must-keep-everything-that-might-be-worth-looking-at-later kind of person, it’s a weird feeling.

But I can feel my brain changing every time I do it.

Not bringing clutter in?  That would be the most efficient form of decluttering, right?