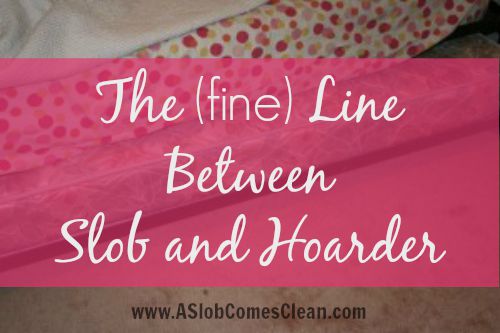 I get quite a few visits to this site each week from people searching something like “What is the difference between a hoarder and a slob?”

As a slob who has had rooms that could get me on a show of that name, it’s a question that has crossed my mind many times.

Some days I think “I’m not that bad” and others I realize that I could easily get that bad.

The question crossed my mind again as I tackled my still-much-better-but-falling-back-into-disarray-as-we-speak daughter’s room.

She now has a daybed with a trundle.  That trundle and all that it represents are her pride and joy.  Pulling it out so my mother could stay in her room one night last summer was a thrill.  Then she wanted to sleep on it herself, have spend-the-nights with her brother, and generally enjoy the fact that there was one more bed in the room.

Meanwhile, as the room stayed in a not-quite-the-way-it’s-supposed-to-be state, clutter found more places to hide and the whole space started getting out of hand.  Finally, while she wasn’t looking, I went in there to put the trundle back underneath her bed. 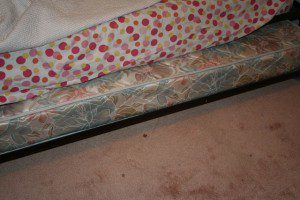 But, likely due to some stealthy jumping sessions, the bed wasn’t lined up just right to slide back under.  And after I grunted and scooted it into just the right place, it would only slide half-way because of random toys that had collected under the bed and were blocking its way.

Now, the simple task of putting the trundle back in place required pulling (and more grunting and heavy sighs), and crawling to get the now-all-the-way-at-the-back toys.

What could have been an easy task, as I’m sure the first trundle-bed-infomercial demonstrated, turned out to be a highly physical one, requiring strength, energy, and flexibility.

And that was when I realized that for some, that’s probably the line.  The line between hoarder and slob.

Perhaps someone like me goes through life as a slob, letting things pile up and get so bad that they have to block off a day on the calendar to spend sorting and lifting and bending and such.

But if something happens before that day, something that means they can no longer bend and lift and such . . . the day may never come.