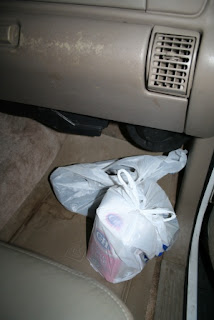 I have no idea which verb tense that would be, but it’s the one that means something happens more than once.  Over and over.

Last year, when we bought our 13 year old Suburban, the weather was nice.  Although we turned on the air, it didn’t have to work very hard.

A month or so later, when I needed it to work hard, I experienced buyer’s remorse BIG TIME because it wasn’t getting the job done.  I mean, did we throw an entire $3,000 down the drain?  The Texas summer was coming, and a vehicle with no A/C is NOT okay with me, no matter how great of a deal we got.

The A/C was blowing, and I could feel that the air was cool, but it seemed to have no power.  No oomph.

We were sweating like pigs, and leather seats aren’t so fabulous when the backs of your thighs stick to them.

We took it to our mechanic, who discovered that  . . . a plastic shopping bag had been sucked up into the air conditioner.  Yes, it was working just fine, but very little air was getting out because of the bag.  Thankfully, he didn’t even charge us.

I chose to live in denial.  I reasoned that it must have been sucked in from outside, and that if it was from the inside, it must have been that way when we got it because I didn’t remember there being an empty bag over there.  (Like me not remembering something like that means anything.)

And then it happened again.

And now I no longer pretend that it’s someone else’s fault.

Even though I KNOW not to put plastic bags, even full ones, in that spot, somehow they end up there.  Now, when we start to fret that “something’s wrong with the air-conditioner” I know to reach up under the big-black-thing-a-ma-jig on the passenger side floorboard.

And there’s always a plastic bag.

And I’m always a little surprised.

(No, this isn’t officially Suburban Week, but I guess it could be.)