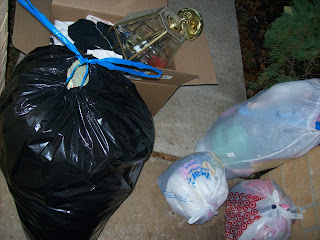 I mentioned last week that for the first time ever, I received a notice that a charity organization was going to be collecting donations in my neighborhood.  I live in a small town, and things like that aren’t as common here as they are in some larger cities.

I was so excited.  Anything to help me eliminate excuses . . . and finally get rid of the stuff I had been driving around with, but kept forgetting to donate.

Of course, I put off gathering and bagging the stuff until the morning they were supposed to come, so I didn’t put out every last thing.  I was frantically getting stuff together, and had to squash down the panic that kept rising in my chest.

What if there’s something here that I didn’t mean to get rid of?  What if there’s a $100 bill in the pocket of these shorts?  What if our washing machine breaks, we all fall in mud puddles every day before we can get it fixed, and it would have been better to keep this too-short pair of pants than to have to go naked for two weeks?

But I put it out there anyway.

And although my heart was hurting a little when I shut the door, it felt light and free when I came home from an outing and saw my totally cleared front door.

Read Newer Post Working in My Weekly Tasks
Read Older Post How to Clean a Messy House . . . and Get It Ready for Guests! (with a Printable Checklist)