One of those things that I’ve begun to appreciate in a new way in this deslobification process.  Though I am still far from being the woman who gets every tiny task done immediately because she can’t stand the thought of letting them pile up, I do now grasp the concept of rhythm in housekeeping.

Daily quick-sweeps of the kitchen are rhythmic.  A four-hour-kitchen-floor-overhaul brought on by months of neglect is . . . . ummmm . . . not rhythmic.

I have a new commitment on Sunday evenings which involves me getting home around 9 p.m.  For the first two weeks, I felt this justified my decision to wait until Monday morning to gather and sort laundry.  But after two weeks of being off of my rhythm, last night I suffered through the inner-whining because I knew that I needed to get back into that finish-all-the-laundry-on-Monday-so-I-can-have-clean-undies-and-no-guilt-for-the-rest-of-the-week rhythm.

That’s an example of me using my Rhythm Philosophy for good.  If you want to know the downside . . . read on.

I’ve said many times that one of the best habits I’ve developed in this deslobification process has been running my dishwasher every single night and emptying it every single morning.

It’s the emptying that makes the biggest difference.  It is now totally natural for me to empty my dishwasher immediately when I get up in the morning.  It’s generally done before the kids get up.  And if the dishwasher is empty, then all dirties can go straight into it all through the day, and my sink doesn’t get piled up with dirty dishes.

But here’s a fabulous example of why no one should look to me as a housekeeping-advisor.

When I get off of my dishwasher running/emptying rhythm (as often happens on weekends), THE most important thing is to get back in rhythm.

The rhythm is more important than clean dishes.  So, last night I didn’t run the dishwasher.

Because it had clean dishes in it, and I CAN ONLY EMPTY IT IN THE MORNING!!!

I had to wait until the morning to empty it, which meant that I woke up to a sink that looked like this: 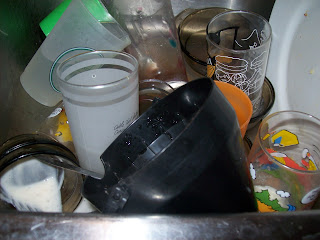 (Actually, it looked worse, because several of the glasses were filled to the brim with greenish liquid, but I dumped them before taking the picture.  Evidently, even though I’m a slob-blogger, I do have some pride.)

Here’s the thing.  If I emptied it last night, and reloaded it, I “probably” wouldn’t have enough in there to run it again, and then today I would be struggling to fit everything in it, and might have to run it in the middle of the day, which would throw me off of my rhythm AGAIN, which would mean that all of the progress I’ve made over the past year would begin to crumble, and it would only be a matter of time before the people who bought all of the junk at my last garage sale started ringing the doorbell and bringing it back to me.

But, this morning when I emptied it, and then started re-loading it, I realized that I probably would have had plenty of dirty dishes to justify running it last night.

And yet, somehow, my Rhythm Philosophy still makes sense to me.