Some people can’t go to sleep if their kitchens aren’t clean.  I’ve always felt strangely jealous of them.

This is what my kitchen looked like when I went to bed last night . . . . and I slept like a baby. 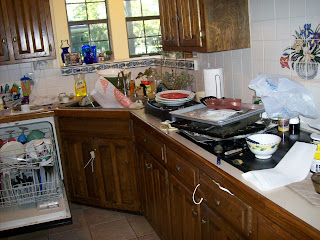 The Dark Side of Freezer Cooking is that while I can throw myself wholeheartedly into playing the character of the energetic, fun, creative, teaching mom who spends the morning cooking with the kids, I’m not so much into playing the part of her maid.

So, this morning, I had to clean the kitchen.  I have great excuses for not doing it yesterday.  Primarily, I didn’t feel like it.  But I also had to write a post about the mess-making-fun-part, go to the pool with the kids, have a birthday party for our dog, go to a meeting at church, and last (but definitely not least) watch an episode of 24 with hubby.  YES, I know the series is over, but we’re watching them for the first time this summer while his job is less stressful, and we love it.  Time spent with him is much more important than some dirty dish.  (See how good I am at the excuses thing?)

ANYway, I thought I would be cute and do the “What can I accomplish in 5 minutes?” thing that I did with my laundry room recently.

But, after about 6 timer-setting-sessions and 5 pictures that looked almost exactly the same as the one above, I gave up on that idea.  This was a big job that I had made bigger . . . . by putting it off.  Pans and baking sheets that could have been quickly washed yesterday, took a lot of scrubbing and soaking today.

But I did it.  And after well-over-an-hour of work, it looked like this: 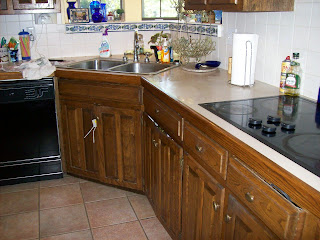 It could have been worse.  I did, last night, run the dishwasher.  It was already full, I shoved in a few more things that were on the top of the sink-pile, and I started it.  Pre-blog, it wouldn’t have occurred to me to do that.  I would have put off doing ANYthing because of the hugeness of the job.  I would have awakened (refreshed) this morning, walked into the kitchen, and felt hopeless.

But by running the dishwasher last night, even though it didn’t make a visual difference in the mess, I was able to empty it this morning, and immediately have a place to put the rest of the dirty dishes . . . getting them off of the counters quickly, and allowing me to feel like I was making progress.

I have to admit, too, that pre-blog, the kitchen might have stayed this way for days.  The fruitlessness of cleaning the kitchen used to zap all of my motivation.  It felt like a never-ending job.  The minute it looked nice, someone (usually me) would mess it up.  But finally, due to the nightly-dishwasher-running-habit, I understand how to stay on top of it, and it doesn’t seem as hopeless anymore.

And because I live a life of irony, here is a wonderful example to illustrate my point.  Once the kitchen was almost clean, my 8yo decided to make an omelet.  No problem, because the stove was now cleared and clean. 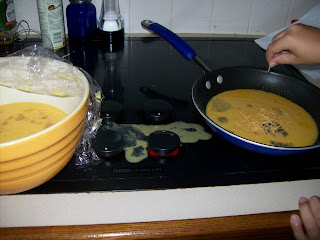 Yep, that’s egg dripped (or poured?) on the stove top all the way from the bowl to the skillet.

And yet, I was able to wipe it right up, without having to move any dirty dishes out of the way.

The fact is, while I’ve always seen myself as the mama who spends time in the kitchen with her kids, I wasn’t able to fully be her until I also accepted the role of her maid.

Read Newer Post How to Get Dried Up Pancake Batter Off of Your Kitchen Counter – A Tip Normal People Don’t Need
Read Older Post Freezer Cooking: A Fun Day in the Kitchen With the Kids