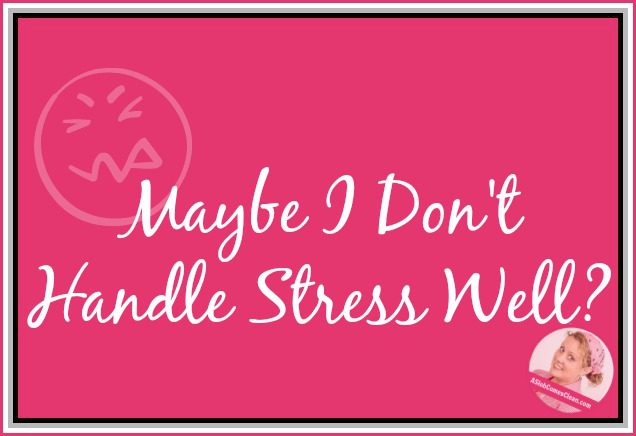 There are things that stress other people, but energize me. I absolutely loved waiting tables for one summer in college. The more I had to run around and keep orders straight, the more fun I was having. At one temp job I handled a switchboard with constant incoming calls . . . LOVED it.

Though outsiders watching the backstage pre-show craziness usually say it stresses them just to see it, I’m at my most alive in the midst of it, barking out orders, coming up with a makeshift costume piece in less than a minute because someone lost theirs, making sure people and things are in the right place at the right time.

But this week has been almost too much for me.

I think it’s a control issue. If I’m the one in charge, I’m happy. But if things are happening beyond my control that I just have to react to and handle, it gets to me.

We’ve had some health issues in our family come up. Although my prayers were answered that we would receive a definitive diagnosis, it wasn’t one I wanted to hear. So now I’m dealing with how our lives are changing. And this change going on is beyond my control.

Let me clarify that it is not anything life-threatening, just normal-way-of-life-that-you-always-imagined-you-had-control-over threatening. I know people who are dealing with much worse.

So hour-away doctor appointments and medications that have to come from special not-in-town pharmacies are now a part of our life. I know that I’ll deal with it and it will soon become our normal. But for now, it’s just completely throwing me off.

I’m feeling so scatter-brained. I saw someone today who had asked me to head up something for my son’s school next year, and I remembered having a second conversation in which I committed to do it. BUT, I can’t remember if the conversation where I made the commitment was real, or if I dreamed it. Yes, I know, WACKO.

Yesterday, while calling in my son’s prescription at the special pharmacy, I decided that I should change my contact number from my home number to my cell number, since I was going to stop on the way home from the doctor. After pressing “2” to say that I needed to change the number, I couldn’t remember my cell phone number. Seriously. I tried and tried, but ended up putting in my husband’s number, and calling him to say he needed to call me if they called him, because I couldn’t think of my own number.

Today, I went to Field Day at my son’s school, and had a terrible allergy attack. The kind where complete strangers were stopping me and asking if I was okay. I was determined to come home, take some strong allergy medicine, and go to bed. Before I could nap, it was time to pick my other son. But I couldn’t find my keys. My keys that I had used less than an hour before. And I couldn’t even find the other set, that I had used last night. I looked and looked, and finally had to call my husband and ask him to leave work and go get our son and bring him home. I lose keys a lot (even though I have a nifty thing to hang them on right inside the door), but I can’t remember a time when I truly couldn’t find them.

Then, when my kindergartner came home, he was in tears because today was graduation pictures, the pictures I had promised him I would buy, and I had completely forgotten to order any or send money. I felt horrible. I tend to be scatter-brained, but I don’t usually forget things like that.

My forgetfulness is on a totally new level this week, with all the things going on.

So, I decided that instead of napping, I would clean up my beyond-a-disaster kitchen. And I would sort through the clutter on the dining room table. If I’m going to get past this current brain-fog, I’m going to have to do something. Something tangible.

And now I feel better. I’ve gone through all of the notes that came home this week but were hastily thrown on the table because we were late for something.

Tomorrow, I have nothing on the calendar. It’s quite possible that there should be something on there, but I’m hoping not. I’m going to use tomorrow to get our surroundings straightened and hopefully this will relieve some of the stress. Thankfully, I’ll be starting at a much better point than if I hadn’t done what I did this afternoon.