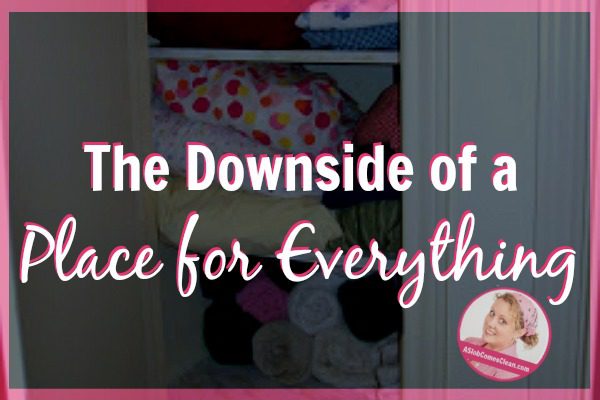 I’m determined to find a place for everything. It was my New Year’s resolution for 2010.

But with my tendency to be a little . . . well . . . excessive, this can have a downside.
I’m a shover. When I find something in a random spot, I get excited if I automatically know where its home is. Taking it there makes me feel like Suzy Homemaker. Isn’t that what normal people do? Put things away . . . not just stand in one spot for 10 minutes staring at an object and trying to decide what to do with it?
So if it has a home, I put it there. I put it there even if there’s no room for it. I put it there even if there are 20 more just like it. I put it there even if it means I have to use my shoulder to close the door.
Having a linen closet is a blessing. Some people don’t have them. And a linen closet is a “spot.” It’s where you can put blankets, sheets, towels, etc. etc. etc.
Etc.
I’m really irritated that my before picture is unpostable. My delightful little camera decided that it could fit one last little picture on the internal memory before telling me that I needed to put an SD card in there. I don’t have the cord to get pictures out of the actual camera, so that picture can’t be shared. And once I got things pulled out, I wasn’t about to recreate the chaos.
You’ll have to imagine the before. Here’s the size of the closet, and one view of all the STUFF that was in it.

Another view of the stuff:

Imagine all of that stuff in that small linen closet. Imagine the parts of sheet sets not necessarily being on the same shelf. Imagine things – shoved.

Now imagine it worse than that. A little worse . . . there, that’s it.

I employed one of orgjunkie’s tricks that I used in the February Organizing Challenge. I pulled EVERYthing out. That stresses me. I never know when I’m going to have a flare-up of my Anti-Task-Completion-Syndrome.

I can’t tell you how many times, pre-blog, I would get a burst of organizing energy and pull things out of a closet/cabinet/whatever . . . and then leave the pulled-out mess there for, well, weeks.

But I’ve learned how quickly most of these tasks can go, and I knew that I needed to see what was lurking in there before my garage sale this Saturday.

I had too many sheets. If I only have one full-size bed in the house, I don’t really need 5 sets of sheets for it. I thought about going down to two, but decided that since its inhabitant is still in the multiple-changes-a-night-in-case-of-sickness stage of life, I should keep three. For the boys, I kept four total. They each have a twin bed, so with my new Laundry Day, there should always be two sets of clean sheets. I got rid of the stripey ones that give me a headache . . . and the Pooh ones. The boys are just too old for Pooh, but it makes me sad. I bought those sheets as enticement for my oldest to sleep in a big boy bed.

I employed a trick that I read about in a magazine, and which a reader mentioned a few months ago. I stuck each piece of a set into one of its pillowcases. This way, they don’t get lost or separated. I tried to organize the shelves according to the height of the people who would need to get to them. Towels and washcloths are on the lowest shelf. Kids sheets are on the middle shelf. Grown-up sheets are on the next shelf up, and odd pillowcases and beach towels are on the very top half-shelf. The beach towels are about to come down in a few weeks, and they probably won’t make it back into the closet at all for the summer, as we swim almost every day.

And here are the things I’m putting in the garage sale:

I had to do quite a bit of self-convincing on some of them. I tried to use the concept I finally grasped yesterday, that I can only have as much as will fit in the space that I have.

This linen closet is a perfect example of how necessary that concept is. I couldn’t find anything in its overcrowded state, so even though I had way too much, it felt like I didn’t have enough. Make sense? 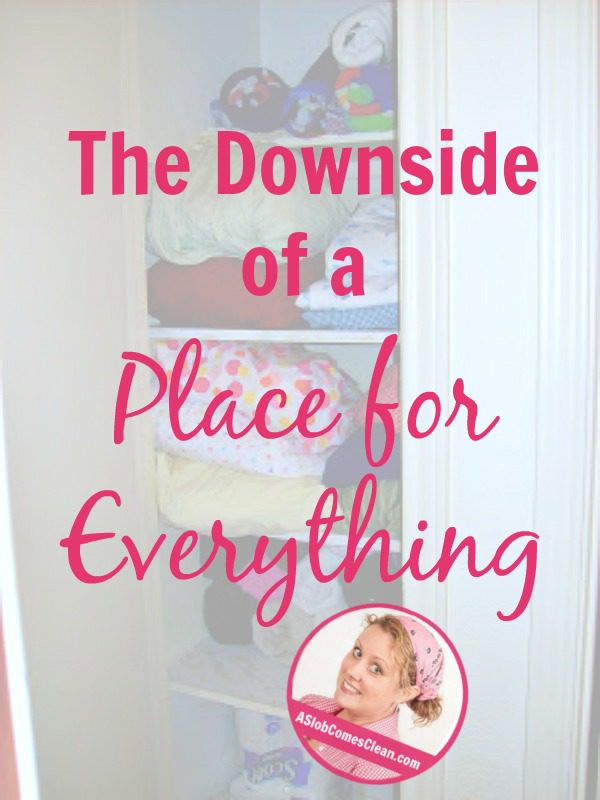