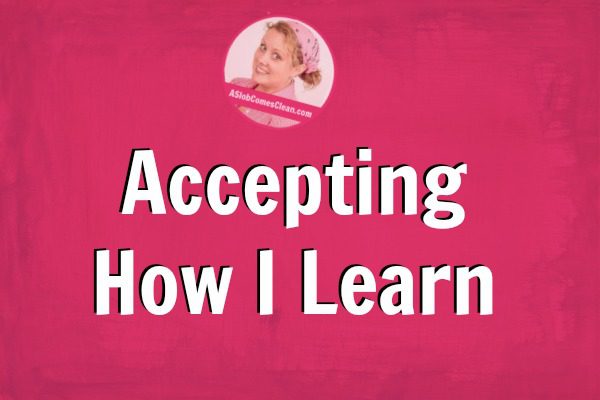 1. Flylady is awesome.  When people ask me for advice here, I try to make it clear that I’m no expert when it comes to cleaning, organizing, etc. and I generally send them her way.  If you want to know what it takes to get your house under control, she’s your woman.  And she’ll tell you exactly what to do.

2. When I talk about “how I learn” I automatically feel defensive.  One of the reasons that my own disorganization used to confuse and fluster me so much is that I am generally a very intelligent, competent person.  I’m a thinker, an analyzer.  I taught Theatre and literature, and absolutely loved analyzing the deep and symbolic meaning behind a poem or a play.  I even enjoyed doing proofs in geometry class.  Figuring out the whys and the logical steps was fun for me.  So why in the world, when I can think analytically, can’t I seem to notice one dirty towel on the floor until it becomes an entire bathroom covered a foot deep in dirty clothes?  This was mind-boggling and incredibly frustrating.

Then today, I had another tap-dance inspired moment of realization.

I pulled out my tap floor after several weeks of making excuses that I was too busy to use it.  I started going through my beloved DVD, and after the first few basic steps, I decided that I would skip that part and move on to the combinations portion.  This was big.  When I first started doing the DVD, I felt like an elephant.  Even though I knew that I used to be able to do the steps, my shuffles just weren’t happening.  But by practicing the basics, the feeling came back to me, and I got them.

Skipping them today, I did okay.  The combinations section, which a few months ago felt completely awkward, was now simple to me.  And then . . . I moved on.  I went to the section where she teaches an actual dance.  You know, the fun part.

And the elephant was back.  Really?  I know how to jump, and I know how to shuffle-ball-change, but trying to put them together made me feel like an idiot.

Sooooo . . . . I stopped the DVD, and hoofed it out.  I jumped and I shuffled and I ball-changed.  Over and over and over and as ungracefully as possible.  I did it slowly and with very little rhythm.  I messed up again and again . . . but I kept going.  And after about 10 minutes, I had it.  Just that one little step, and far from perfect, but for me it was huge.  And the rhythm got a little better and started to sound like maybe, just maybe . . . I was actually tap-dancing.

I turned the DVD back on, and tried it with her again.  And this time I got it!  I even went on with the next two steps, which were really easy, and felt like I had learned the first part of the routine.

See, I watch the video, and I get overwhelmed when I feel like I should have grasped that step by the time she finishes teaching it.  She teaches it, she practices it, and then she moves on.  But I’m not ready to move on.  I’m still tripping over myself, and if I do go on, it will be a complete train wreck . . . arms, legs and tap shoes everywhere.

And this is when it hit me.  This is why Flylady didn’t work for me.  I needed the instruction on what was required to bring my home out of chaos and keep it in order, and she did that.  But I needed to build these skills at my own pace.  You could completely argue that it’s possible to do Flylady’s system at your own pace.  It definitely is possible.  But all of the emails, the sheer information overload was too much for me.  It overwhelmed me and made me feel like a failure, so I started ignoring the emails.  I set up a folder that they automatically went into (thinking I’d get to them eventually), and when I finally unsubscribed, I had over 6,000 unread emails in that folder.

Again, let me say that Flylady is great.  She is big on saying that progress is more important than perfection.  She encourages you to just do things, and let go of your perfectionist tendencies.  But at the point when I became overwhelmed and stopped reading her emails, each one that came in (each 20-30 per day, really) made me feel like the class was moving on without me and I was falling behind.

This is why my own process, done at my own pace, is working better for me.  I’m taking it slowly, and although sometimes I marvel that even though I’ve been steadily decluttering and changing habits for almost 8 months now, I still am not done.

I need to practice things until I get them right.  Until they no longer feel foreign.  And I need to practice them at my own pace.  That’s why, for now, re-learning tap by a DVD is working better for me.  I don’t have to feel like anyone’s watching me.  (Though, for the record, my 4yo daughter thinks I’m “doing great!”)  I don’t have to move on to the next skill before I master the last one, just because the rest of the class is ready.  I can practice until I get it right, without a teacher getting antsy that it’s taking me so long.  I have faith in myself that I CAN do this.  Some things come easily, and others take lots of practice, but I’ll take as long as I need, because that’s how I learn.

Note from the future: I wrote this post back in 2010, in the first year of what I now call my deslobification process. I’ve come a LONG way since then. A few years in, after resisting with every fiber of my being, I did start giving advice. I now have written two books for hopeless cases like me from the perspective of someone who totally understands. I also have a totally free e-book that shares my heart, the story of how God worked in me through this process and finally brought me to the point where I agreed to let Him use this part of me that I had hoped to keep hidden forever. 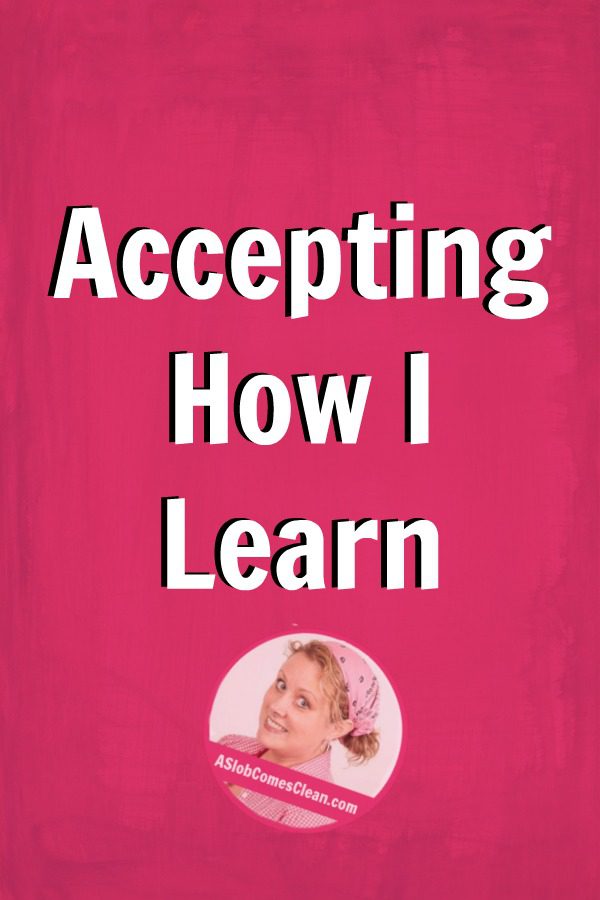