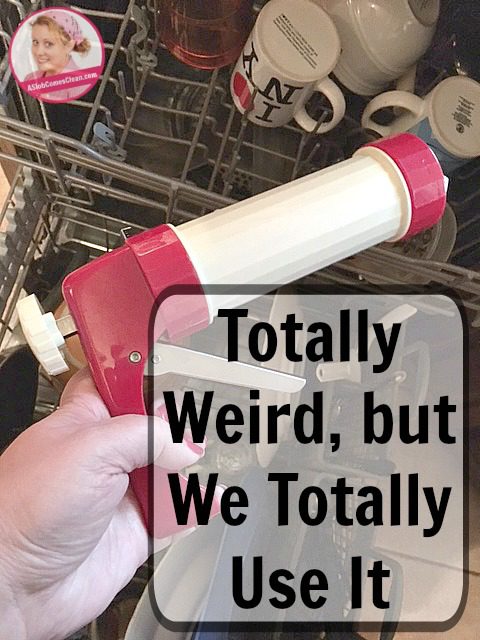 That person randomly started talking about stuff he can’t believe someone would ever purchase. Something totally and completely useless and destined to turn into clutter.

Yeah. We totally have a jerky gun in our cabinet.

He couldn’t imagine why anyone would ever need one. But we need one. My husband uses it . . . to make jerky.

You pack it with ground meat and squeeze that meat out in flat, jerky-ish strips. Then you jerkify those strips until they’re jerky.

My husband loves that thing. We have had it for years, and he has used it so so many times. My kids love his jerky, and no matter how much he makes, it’s gone within days.

And y’all, have you priced jerky in the stores? That stuff ain’t cheap.

(Please note that I normally avoid using non-words like “ain’t,” but when talking about jerky and jerky guns, it feels right.)

So my point? Clutter is personal. If we use it consistently, even if not daily, it’s not clutter. If it’s a cool idea but we’ll never use it, it’s clutter.

The jerky gun we have is out of stock on Amazon, when sold alone. But here it is with seasonings and a dehydrator.  Proof that jerky is expensive (or a convenient link for those who’ve realized they will never make jerky but want to put in a stocking as a non-clutter stuffer).