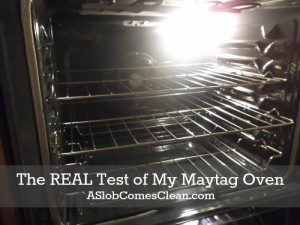 Things have been more-than-a-little busy around here.

I use the stove all the time, but now that Christmas is here . . . I’m so excited to have a BIG, HUGE oven for baking!

While I’d love to show pictures of fancy-schmancy stuff like leg of lamb or some-sort-of souffle (not that I’ve EVER made those things) . . . I’m going to share how this oven works in real life.

When I was with my family for our Christmas celebration last weekend, my brother asked the real question that real families everywhere want to know, “Can it cook two pizzas at the same time?”

My old one couldn’t.  The top pizza browned/blackened on top, but the cheese on the bottom pizza barely even melted.

And the crust on the bottom pizza burned.

I could manage, but it was a dance of switching the pizzas half-way through.

When the Kitchen Lady at the Maytag labs gave us a demo, she pointed out some mistakes that many people make with ovens in general.

Be sure your cookie sheets/pizza pans don’t touch the sides of the oven.  This blocks air from circulating, and food can’t cook evenly.

Hmmmm.  I never would have thought of that. 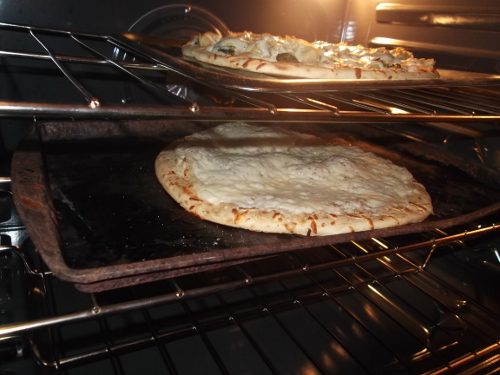 So it makes sense that my two pizzas tonight cooked ever-so-much more evenly in my new oven.  There was plenty of space on the sides and plenty of space between the racks.

And now I get to share a lovely piece cleaning-nerd information that I learned when I visited the Maytag labs.  Do you know why this oven is so big, even though it doesn’t take up any more kitchen space than a typical oven?

The oven doesn’t need as much insulation space . . . because its cleaning system ISN’T the typical kind that requires the oven to heat up to 800 degrees.  Y’know, so it can incinerate everything inside.  It uses the AquaLift cleaning system.

Now, I wasn’t so sure about a new cleaning method since I just finally got up the nerve to use the self-cleaning feature on my old oven about a year ago. 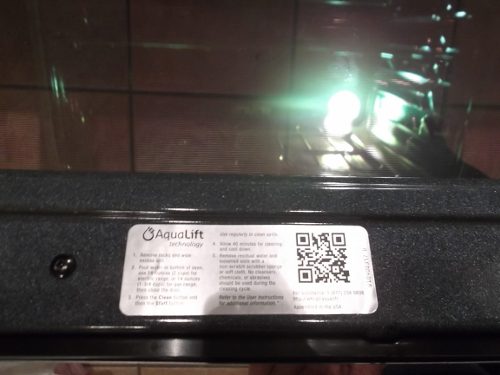 I also love that there’s a QR code permanently on the inside of my oven.  If I scan it with my phone, it will take me straight to instructions on how to use the system.  Or, if I just push the “clean” button on the oven, the display screen goes through the instructions step-by-step.

It’s almost as if “they” know that I won’t be able to find the instruction book . . .

The AquaLift system also allows you to clean the oven without using chemicals or needing to open windows because of the smoke. Yay for that!

Do you have trouble cooking two pizzas at a time?

I wrote this post participating in a Maytag Moms Dependable Kitchen Ambassador program by Mom Central Consulting on behalf of Maytag. I was provided with a Maytag kitchen appliances set, including a refrigerator,  dishwasher, range and vent to facilitate my post