That could possibly sound noble, while this is most certainly not noble: 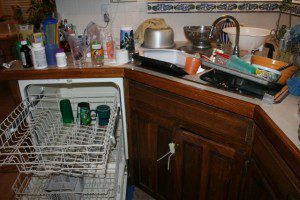 Especially since the oft-repeated instruction in my e-book is “Do the dishes.”

I have a mostly-written post that I was going to put up today.  It’s all about how there is a limit to how much I can handle and how once I go over that limit, certain things get shoved out of my brain.

But then this morning (this first-Thursday-in-a-long-time-when-I-didn’t-have-a-writing-deadline-as-a-great-excuse), I knew I had to spend time (real time) on my house.

Especially in the kitchen.

Because even though I know how important the kitchen is to the state of the rest of the house, and even though I know that for my brain I have to run the dishwasher every night and empty it first thing every morning, I still got off my rhythm in the past few weeks and that picture up there happened.

So while I wished I could have done some major cleaning on this first-free-day-in-forever, I was stuck catching up in the kitchen.

And when that was done, I decided to tackle this: 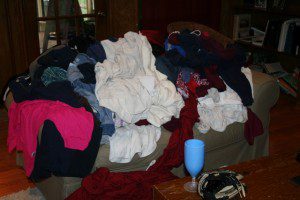 Which was also a huge frustration since I had been doing so much better at avoiding Clean Laundry Mountain.  But give me a week of being out of the house every day working on our church’s Easter production, and another Laundry Day that was also a day-out-of-the-routine because Hubby and the kids were off, and it was as if no progress had been made at all in those previous weeks.

But now the sink is empty, a whole-lotta big dishes are drying, and the couch is once again usable. 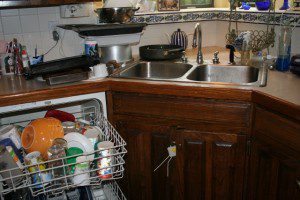 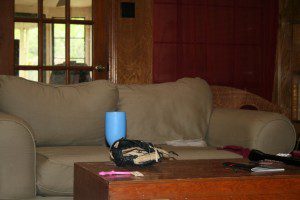 Yes, as a matter of fact, I DID take this after picture from the spot where I was writing and didn’t bother to clear the coffee table or pick up the dryer sheet or last lone napkin first.

I started out timing myself, but I’ll just tell you that these two tasks took the entire morning. Not that they needed to, but I wasn’t exactly putting much oomph into them.  And . . . there were multiple gotta-call-so-and-so or gotta-google-such-and-such distractions.  It’s amazing how my brain starts remembering things while I’m cleaning.

So there you have it.  Honesty.  Frustrating and humiliating honesty.  I would so love to become the blogger who smiles and acts like it’s easy to keep your house constantly in order “once you get the hang of it” but unfortunately, I doubt I ever will.

Here’s the biggest chunk of honesty for this post: I didn’t want to blog about this. I wanted to casually mention that I’d spent the morning “catching up” so my readers wouldn’t get discouraged to see that Nony still struggles at the very most basic of the basics.

But that goes against my reason for this blog.  And I hope ultimately, someone can gain hope that it’s still possible to keep chugging along after you fail one . . . more . . . time.

Pre-blog, I didn’t have that hope.