More tips from The Girl Who Knows Too Much (about garage sales). 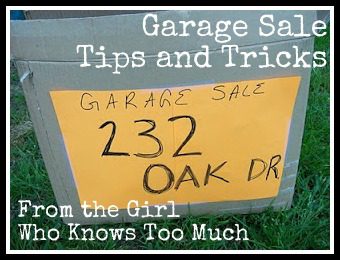 Once you’ve established some realistic expectations for your garage sale, let’s talk pricing. Even though you’ve given up the idea of buying a new car with your proceeds, it’s okay to be honest about wanting to make some money. If you didn’t want to make money, you’d just donate all of it.

Before I start with pricing tips, let me remind you that if you think something has real value, try selling it on ebay or Craigslist first. If your garage sale is two to three weeks away, like mine is, now is a great time. While working in the garage on Saturday, I pulled out a few things to do this with myself. They are specialty items like dance shoes, sought-after toys, or boutique clothing. I view this as giving these items a shot at making some real money. If they don’t sell, I will stick them in the sale and price them low to get them out of here. At least I’ll have no what-ifs or regrets.

Now for the pricing tips.

Let me share a story. It’s a real story told to me by a friend, but know that it is not unique. I’ve heard it from many people with slightly different details.

She put the nice clothing on hangers and arranged it by size, season, etc. She looked at each piece and priced it according to what she (who is used to paying “store” prices, and knows the high-end brands) thought was a rock-bottom price. Generally 2-4 dollars apiece. As an afterthought, she decided to also sell the stained onesies and sleepers, but since no one would want those, she put them in a box and labeled it “25 cents each.”

Can you guess what happened? No one even looked at the nicely hung clothing, but pretty much fought over the stained sleepers.

The reality is that people probably did look at the hung clothing, but when they saw prices that they considered high for that area, they didn’t bother to keep looking. But “25 cents” caught their eye. She should have taken those nicely hung clothes to a resale shop first, seen how much she could get for them, and then put the leftovers in her garage sale for a price more in line with the garage sale prices in her area.

Just last week, I went to a sale like this. The dresses were beautiful, but they were about a size above my daughter’s current size. They were priced between 2 and 3 dollars. If my daughter needed dresses and was wearing that exact size right now I might have purchased 3 at that price. But if they were priced at .50-1.00, I probably would have taken everything she had, and saved them for future use. And I don’t think it’s just me, since I got to this sale quite late and her racks were still full.

Now, please note that pricing is different in different areas. Like I said in the first post of this series, do your homework. Ask your friends who have had garage sales if they sold a lot of clothes. If they live in your area, and sold a lot, try the price they did. If they didn’t sell many clothes (or toys or whatever you’re selling) try a lower price.

Here’s how I operate as a garage sale shopper. If an item of clothing is 3.00, I probably won’t buy it, unless it’s in like-new condition, is exactly the right size, I NEED it, and it’s the end of the day and I haven’t found anything else. If it’s 2.00, I might buy it if all of those things are still true, but I’ll try to talk myself out of it. If it’s 1.00, I’ll buy it if it’s in really good condition. If it’s .50 or less, I’ll tear through that pile and grab anything that MIGHT work. Guaranteed, I’ll spend more money at the sale that prices things at 1.00 and under. And they get rid of more stuff.

I’m focusing on clothing here, but the concept applies to all of your stuff. I’m not suggesting you sell a couch or recliner for 5 dollars, but if you’re thinking you want 300 dollars for a 15 year old couch, you should probably think again. A bread machine new in the box might go for 15 dollars, but a used one with the manual missing probably won’t.

Don’t just discount the original store price you paid, think garage sale price. A Little Tikes car that was originally 50 probably won’t sell for 40, but it might roll on out for 5 or 10.

This is difficult. You remember that toy on the day that you gave it to your daughter and her eyes lit up. This memory can keep you from seeing that it is now rather fuzzy. A stain might not have been noticeable when your son continued to wear that shirt, but it’s noticeable to the person who is considering paying 2.00 for it. Garage-salers love church garage sales because generally, the people pricing the items don’t have any emotional attachment.

Remove the emotional value when you price the item, but let yourself cry when you see it leave your driveway. I boo-hooed when we sold our crib.

What if “people don’t buy clothes around here”? This is true in some areas. Where I used to live, clothes didn’t do very well. At least I thought they didn’t until I went to a sale where they had a big sign that said “All clothes – 25 cents.” I had never looked at adult clothing at a garage sale before, but that made me look. I even went to the seller and asked if it really meant “all” clothing. Yes, it did. I found some really cute clothes there.

The next day, when I was having my own garage sale (yes, I know), I decided to try the same thing. It worked, and I made more money than I had ever made at a sale before. See, I have three kids, and I have a problem with excessivity (nice made-up word for collecting clutter/being a slob), so I generally have a lot of clothing to sell. If I sell 100 pieces of clothing, that’s 25.00. And at my last sale, I decided to be crazy and priced clothes at .50 apiece, and still it left my garage like crazy. I probably made at least 100 to 150 just on clothing priced at .50 an item. Not bad!

And blanket pricing, meaning posting a sign that says “All ________ – $1.00” makes people look at things that they might not otherwise look at. It also helps things even out in the end. While it may kill you to “give away” that Gymboree sweater for a dollar, you may also giggle with glee that someone paid 1.00 for those shorts with a hole in the crotch.

Remember that garage sales operate on cash. Once people are out of money, they’re out of money. If they come to your sale first because your ad said you had exactly the items they wanted, but your prices are higher than most garage sales in your area (and they know because they shop garage sales regularly), they are probably going to keep on going to other sales. Why would they spend 5.00 to purchase one item at your sale when they might get to another sale and buy 5, or even 10 items for that 5.00? You want them to spend the money at your sale, and you want that stuff gone!

If you’re trying to get rid of things, price them low. It is amazing how quickly quarters and one-dollar-bills add up. A few years ago, I had a huge sale. I priced almost everything at 1.00 or less. Truly. The only things higher than that were a bassinet which I sold for 5.00, a set of dishes which I sold for 5.00 and a recliner that I sold for 40.00. I made over 250.00. Not bad!

Here’s where I state that there’s always the possibility that I’m wrong. You could have a very rich, spendy person, pockets full of cash, who comes to your sale. They might absolutely love everything that you have deemed to be junk. They might be fully aware of “real-store” prices for all of your items, and realize what fabulous deals they are getting. It could happen, and to a degree, does happen occasionally. But it’s a gamble.

I’m not a gambler.

The next post in this series will cover set-up. I’ll also share some tricks and a few things to avoid. It will answer questions such as: Do I put a sticker on each and every item? Do I have to hang up all of my clothing? When and where should I have the sale?