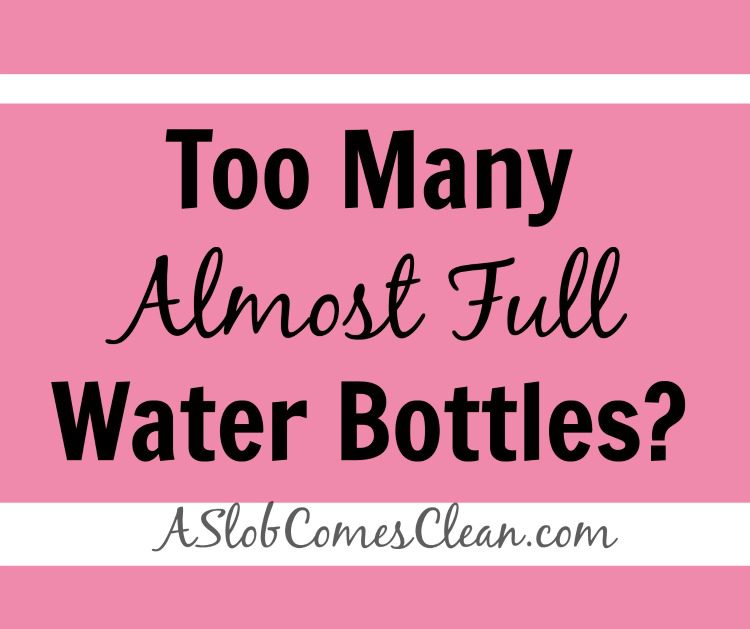 I’m sure no organized and always prepared mother has this problem, but I do.

I’d hate to know how many almost-full water bottles I’ve thrown away since I first reproduced.

And every single time I do, it hurts. It’s the big internal battle between the cheapskate-me and the germaphobe-me.

But I’ve finally found a solution. Instead of lugging 4 water bottles to the park, I take one (maybe two) and keep a box of dixie cups in the car. So instead of gathering up 4 bottles (which you would think are completely full until you look to see that the seal has been broken) and carrying them to the car where they’re destined to remain for weeks, I throw away the one empty bottle and the four cups that we used.

I know there are probably better solutions. I could carry a sharpie marker in my purse. I have done that and it doesn’t make enough of a difference in how much water is consumed or my memory of how long ago the person with that initial used it, and I usually lose the marker before the third time I need it. I could make sure that each child removes their bottle from the car, places it in the fridge and then drinks it later. Except that that’s too many details for my scattered brain to handle. We end up with, well, MORE THAN FOUR bottles in the fridge and I can’t remember how old any of them are.

And of course, the most obvious “I could” is that I could get cute little reusable water bottles. To me, things like that are the stuff of dreams. I’d love to someday be the with-it person who removes things from her vehicle (even the third row) every single time she gets out of it and then immediately takes the aforementioned things to the proper place within the house and consistently remembers to wash them so that they’re ready for the next day.

But I’m not that person yet. I’m working hard to get there, but for now, I have to accept where I am and enjoy the fact that I’ve figured out a way to not waste 90% of the water in 70% of the water bottles we use, AND be able to throw away everything in that smelly bee-ridden park trashcan before we leave, so that we don’t add to the disaster area that is our family vehicle.

Oh, and I’m sure there are those families who all drink from the same water bottle. I am physically (or is it mentally?) incapable of doing that. Have you ever looked at a water bottle after a 3yo drinks from it?