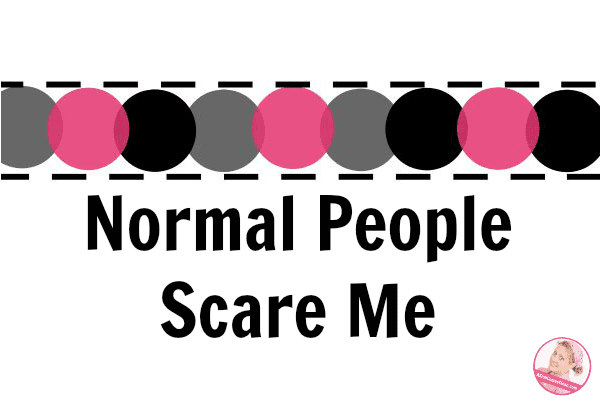 I love blogging. I’m generally an open person. But I don’t tell any “normal people” about my blog.

Other than my husband, my mother, and two friends who have known me and loved me unconditionally since Jr. High, no one in my real-life world knows.

But sometimes it’s hard to not mention. If it’s been a busy week of posting and linking up to blog carnivals and I’m pumped because I got a new follower, I can only say, “I’ve been really busy.”

I have moments when I think it would be okay to tell someone if it came up. But then I decide that that’s crazy.

See, I’ve made progress. I am a “recovering slob.” But I have such a long way to go. The four people who know, are proud of me because they have the perspective of how bad it’s been in the past. They know that I’ve struggled with this for my entire life and that the fact that my house has so much less clutter and has been generally presentable for multiple months in a row is HUGE.

But “normal” people wouldn’t get it. They’ve never been allowed into the master bedroom. They’ve only been in the house when I’ve worked hard to make it “presentable.”

I sometimes picture the subject coming up while we have people over. (I have no idea how it would come up, but I have a good imagination.) Anyway . . . .

But I’m afraid that instead of that scenario, in reality they would nod a little TOO knowingly. They would unconsciously wrinkle their noses in the direction of the bathroom. Their eyes would dart to a corner of the room that I hadn’t noticed had a dead bug in it.