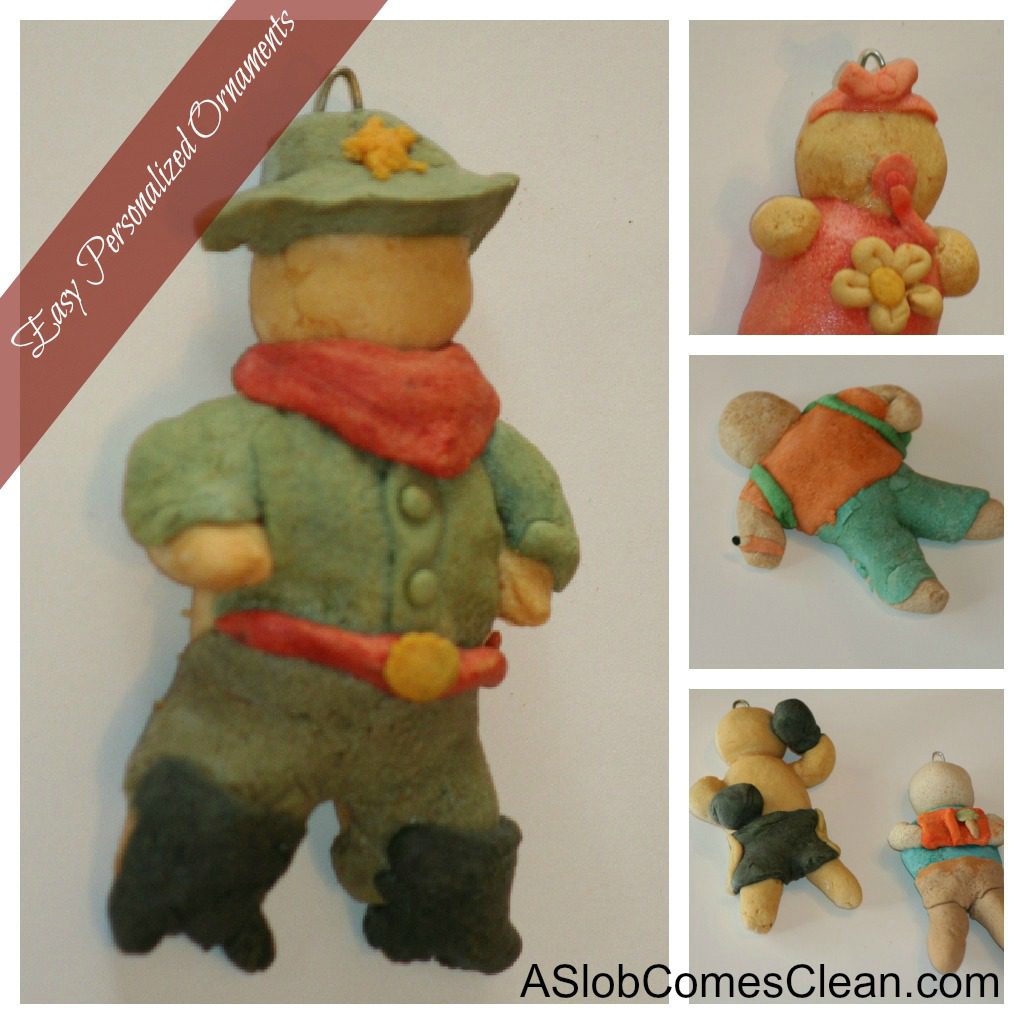 I love these. I generally don’t consider myself a crafty person, but these make me feel crafty.

I learned how to make them about 5 years ago, and now it’s a definite tradition. I know that many families give an ornament to each child every year. These have become our version of that, and they cost truly pennies apiece! The kids can’t wait to see how they’ll be portrayed in their ornament. Sometimes, I even let them choose.
Basically this craft is like playing with play-dough. You make a recipe of salt dough. I use this one (but you can use any of the millions on the net):

2. Add in half the water, then gradually add the remaining water.

3. Knead until the dough is smooth, this can take up to 10 minutes.

4. Place dough in a Ziploc bag with the air squeezed out, or wrap it tightly in saran wrap until you’re ready to use it.

I like to make mine with my stand mixer. I let it do the kneading for me, which keeps my hands from drying out quite as much from the salt that’s in it.
Once you have the dough, just start playing, creating it directly on a cookie sheet. Make the body, using a wet fingertip to “glue” the body parts together. If you find that your dough is too sticky, add a tiny bit of flour, just as you would if forming yeast rolls.
To make the dough colored, it probably works best to use the Wilton gels, but I’ve also used liquid food coloring when I needed a certain color. Dab a little food coloring onto a ball of dough using a toothpick or a fork. Then just roll it until it is worked evenly through the dough.

At first it will look like this, but if you keep rolling, it will eventually look even.

Helpful hint: Don’t do this on the day you’re supposed to play Mary at church, unless you think Mary should have blue hands.

You can choose whether or not you want to make the body, and then lay the clothes on top of it, or color the body itself to cut out a step. I’ve done it both ways. I like the look of the clothes and body being separate. This back view shows the difference.

Then decide on something that would identify your child for the past year. These three are ones I have made for my oldest son. The one on the left is from the first year I did this. He was three and loved to play football. In the middle was the year he was particularly obsessed with boxing (it’s my favorite). The last one is last year, the year he started reading chapter books. He was reading Magic Tree House books like crazy. It kind of looks like a carrot on the cover of his book, but it’s a tree. I promise.

On the left is the first one I made of my second son, when he was just over a year old. He’s eating cookies. The next one was the year that he had a cowboy-themed birthday party. The others are an artist and a builder, both of which could define him any year.

For girls, I use a garlic press to make the hair. I usually leave the boys bald.

This year, my kindergartner wanted his to have a backpack and a pencil since it’s his first year of school.

This is my husband. I made him the first year, but now I generally just do the kids. He’s in camo with a bow-and-arrow. The lady who taught me to do this said that she made an ornament of her daughter-in-law the year she was pregnant! So cute!

When they’re done, cut off the top of a paperclip with wire-cutters, and stick it in the top of their head, and bake them for 1-2 hours at 225. They’re done when they easily come off with an egg-turner. If they’re still sticking, they’re probably not done yet. Keep an eye on them, as I have burned them before. Believe me, there’s a lot of guilt involved when you overcook your children.

After they’re cooled, spray them with clear varnish, the shinier the better.

For the cost of flour, salt, and food coloring (most of which you already have) you can have a set of incredibly meaningful ornaments. As I said before, I am generally not a crafty person, but I love to see my kids faces when they see their ornament for the year. They beam when they figure out what thing I’ve decided on to show their personality.

Check out lots of great Under 10$ gift ideas at Frugal Friday.